18/11/14 Went to Hornsea Mere with RL on Tuesday morning. Started in HVWG Hide. Had 2 Slavonian Grebes in the middle of the lake west of the hide and a more distance bird close to Kirkholme Point. Went round to Kirkholme Point to get some pictures.

Told a 4th Slavonian Grebe was again off the jetties but couldn’t locate it although we were looking into the sun. Went round to Wassand Hide but added nothing to the day list.

Went to Barmston this afternoon. Had been a good movement of Little Auk recently but the winds had gone east today and judging from the small numbers record so far today didn’t look too promising for us. The easterlies also meant it felt cold, a rare thing so far this autumn. Also the sea rough and only found 3 Common Scoter and a Red-throated Diver on it. Also little moving. Started looking further afield. RL picked up a dark object bobbing off the outfall marker. We both thought Little Auk, but was it alive? RL saw it put it’s head up so at least still breathing so a year tick. Walked south to get parallel then followed it as it drifted north with tide. 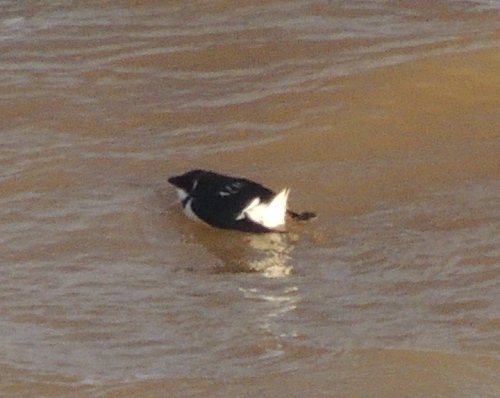 Although not 100% was still fit enough to dive ahead of the bigger waves and occasionally flapped it’s wings.

Followed it to the north of the caravan park where I got down onto the beach to get closer. The usual fate of flightless Little Auks is to be taken by a large gull but this one was lucky to go unnoticed while we were there at least. With the tide up there were few waders just a small mobile flock containing 4 Sanderling, 10 Ringed Plover and a Turnstone.

Went to Tophill Low NR late afternoon to do the gull roost on D reservoir. Nothing unusual but numbers were decent with:-

The nest box team had seen the regular Scaup but not the Grey Phalarope. Later found a BTO worker, looking for signs of bird flu, had seen the phalarope but not logged it. Fortunately didn’t see any sickly wildfowl! Check here for more on bird flu.

19/11/14 At least one Slavonian Grebe was still at Hornsea Mere on Wednesday morning. The Grey Phalarope was at Tophill Low still in the south west corner of the D reservoir. Also the first bittern of the winter was picked up coming in to roost at Watton NR in the afternoon and couple of jays were seen. For recent news from Tophill Low NR check here. Two Little Auks were on the sea off Barmston caravan park early afternoon