11/11/14 A phalarope was found by the nest box team at Tophill Low NR late Tuesday morning. RL went to check it out and not surprisingly, considering the number of recent sightings, it was a Grey. However it was at the north end of D reservoir and viewing was difficult. 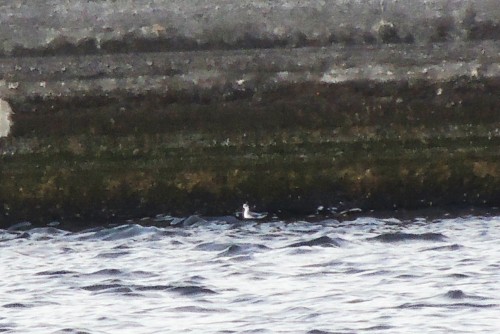 Didn’t need it for the site or even the year [see here] so didn’t consider it worth the trip that late in the day. Did Welton Waters instead. Again some ducks on the watersports pit but nothing on Brough Angling Complex due to dye used to suppress weed growth which also seems to discourage ducks. A pair of Marsh Harriers roosted on Brough airfield marsh, presumably the pair that I consider to have bred there this year.

14/11/14 Despite no reports between times the Grey Phalarope was seen again by Lee Johnson on Friday afternoon. However may not have been looked for since, not helped by heavy rain on Thursday. Also had a 3rd winter Caspian Gull briefly.

15/11/14 Heavy fog on Saturday meant relocating the Grey Phalarope in the morning was very difficult. It was finally found against the wall below North Hide by RL, much to the relief of a group of hopefuls in the hide and at least one regular who had missed the last one.

Also a Scaup on the reservoir. 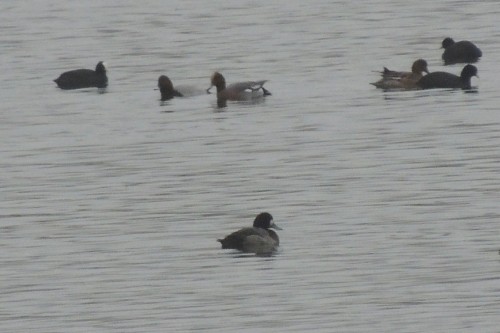 16/11/14 On Sunday finally had enough time to make a trip to Tophill Low NR. Fortunately the Phalarope had already been located by the time I got there. Spend all day feeding either side of middle hide but as it stayed close to the reservoir wall was only viewable from car park or north hide and therefore distant.

Watched it from the car park hide for a while then went to check D wood feeders. Heard and saw several Willow and Marsh Tits.

Also had a Chiffchaff. Not a drab bird so likely a wintering bird from the near continent.

Report of a Jack Snipe on South Marsh West early afternoon but didn’t show in my two visits but did have a male Marsh Harrier over. Also a large flock of Fieldfare on the river bank from South Marsh East hide.

Up to 3 Slavonian Grebes still seen regularly at Hornsea Mere from Kirkholme Point with 4 reported this morning.

8/12 2 Velvet Scoters and 4 Common Scoter at the east end of Hornsea Mere on Saturday.

9/12 Went to Tophill Low NR with John on Sunday morning. Checked D reservoir from the car park hide and had 3 Pintail, including 2 drakes. Roy Vincent had again had goods views of Otter on North Marsh c9am. As John has yet to see Otter we gave it a while but only had a distant Kingfisher.

On leaving had 3 Lesser Redpoll and a Treecreeper but found out later we had missed  Otter again by a few minutes. Did the south end this afternoon. Had 4  Siskin by North Lagoon.

As with D reservoir wildfowl numbers were now up to usual winter numbers on O reservoir and Watton NR but no increase yet in quality. Had 30 Curlew on Watton NR which had increased to 68 later {Pete Drury}. Did the gull roost with Martin H and had an adult Yellow-legged Gull. Martin had had a Caspian Gull on Friday [here] and 1st winter Med Gull on Saturday. Also check Martin account of the weekend here. Particularly of interest for fungi fan. Check the Tophill Blog for more on the last week, including an account of the recently accepted 1st Tophill Caspian Gull.

The day started warmer than of late, with no over night frost, but a northerly wind set in early dropping the temperature but clearing the cloud. This wind is forecast to continue for a few days bringing much colder temperatures but now forecast to bring a only a small amount of snow. Warmer wetter weather is expected later in the week.

10 Waxwings again in Nafferton by Nethergate level crossing this afternoon.

The blog now has it’s own email account hullvalleyblog@gmail.com. Please use this to send in any wildlife news for the Hull Valley recording area for inclusion here. Also any photographs will be welcome.

Filed under Nature in East Yorkshire