8/7/14 After performing for at least a few birders on Arram Carrs on Monday the Common Crane was a no show for Geoff Dobbs early on Tuesday but was seen again early evening in the same area as yesterday.

9/7/14 The Common Crane remained on Arram Carrs until at least late morning on Wednesday.

Went to High Eske late afternoon with the intention of checking for the Common Crane from the other side of the river for friends heading for it in the evening. Had a good look at the nature reserve below heading north. Three Little Egrets were showing well. 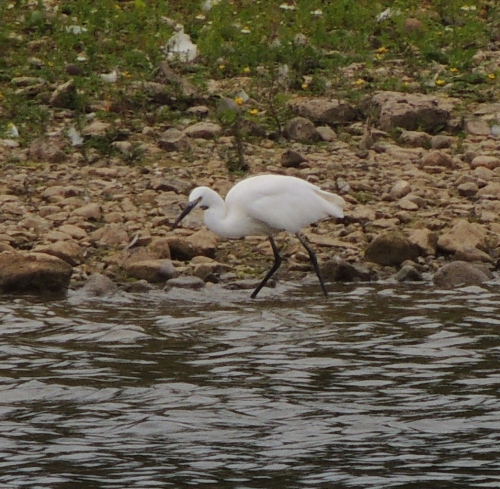 Also a Little Ringed Plover on the east shore. Flushed a small wader. which didn’t fly like a plover and wasn’t surprised on ‘scoping it in the north-west corner that it was a Common Sandpiper. Also at least two Common Terns were still feeding on the reserve then flying north, possibly to Tophill Low NR. Three pairs of Great Crested Grebes were again attempting to nest on the same mounds they had been washed off last week.

Couldn’t see the Common Crane in the usual fields with the Mute Swans but there are at lot of hedges it could hide behind. Thought I had it the next field south but on closer view it was a Grey Heron! However on reaching Leven Canal had the Common Crane back on Leven Carrs. Very close to the path by Leven Canal so walked towards it keeping low. Got as close as I dared then took a few picture although the tall vegetation got in the way.

Retreated again keeping low to avoid flushing it [although some might have thanked me if it returned to the west of the river]. Met Richard Jennings and walked back south together. Had a tatty cream-crown Marsh Harrier over the river and a Kingfisher over the nature reserve.