17/10 Went to High Eske NR on Friday morning. Wildfowl number still low with only 2 Goldeneye new in since Sunday. The female present since late 2006 hasn’t been seen for a few week so must be assumed dead, but 8 years isn’t bad for a flightless bird. Hadn’t seen the Common Crane since last Thursday and no reports of it since Saturday. Walked south but no sign near Arram Grange. Walked round the back of the pit and was surprised to see the Terrapin hauled out on a dead tree in the pond in the north-west corner. An indication of how unseasonably mild it is.

Walking north along the river there were six Whooper Swans on Arram Carrs, presumably part of the flock from Sunday.

After the recent rain there is a lot of water on Arram Carrs although not at 2012 level. However along with the Lapwing there were several Mallard, Wigeon, Teal and best of all 3 Pintail.

Walked as fair as Leven Carrs but still no sign of the Common Crane. If it has finally gone I wonder whether it has flew south or linked it with the flocks in the Cambridgeshire and Norfolk.

Went to Hornsea Mere this afternoon. Started in HVWG Hide but saw nothing of interest. Moved to Kirkholme Point where a few other birders were viewing the grebes. The Red-necked Grebe was off the jetties but distance. Only 2 Slavonian Grebes were reported today and late afternoon they were close into the south side. Again didn’t see the female Scaup. Went to the south side and got reasonably close to to Slavs from the corner of 2nd field from where the Spotted Crake was viewed a year ago.

Heard a Water Rail but the water level is too high this year to have a chance of seeing it. Walking back met a birder looking for the Red-necked Grebe with only a pair of compact Leica bins. Managed to showed him it through my scope although even through it it was very distant.

Had a quick look at Swine Moor at dusk but again barren.

A good day at Hornsea Mere

15/10 Went out with RL on Monday afternoon. Went first to Swine Moor, viewing as usual from Weel Road opposite Corporation Farm. On Sunday afternoon I had found a juvenile Pectoral Sandpiper with Richard Jennings. Also had up 7 Ruff and 6 Dunlin along with the usual flock of Wigeon and Teal. Also that day had the 1st 10 returning Whooper Swans north of High Eske NR on Arram Carrs but didn’t see the Common Crane, Had hoped to get back to Swine Moor earlier but the weather on Monday and Tuesday had not encouraged me. However this afternoon the area was deserted with just the regular Little Egret of note.

Went to Hornsea Mere starting at Wassand Hide. Met MR on the way down. Had had the 2 Slavonian Grebes off Kirkholme Point and a 3rd bird towards the west end. Also found a Red-necked Grebe and had seen a dying Gannet on “tree island”. Not long after getting in the hide MR picked up a grebe which turned out to be the 3rd Slavonian Grebe presumably pushed into Decoy Bay by a boat.

One of the Slavonian Grebes from Wassand Hide-5/10/14

Next went round to Kirkholme Point. Scanning the edge of 1st field, where the other 2 Slavonian Grebes had been seen, picked up a female Velvet Scoter, possibly the same bird seen over the previous 2 winters.

Scanning further east I picked up the 2 Slavonian Grebes, then the Red-necked Grebe.

Moved to get closer t0 the latter and had a moment of self doubt when I picked up a Little Grebe. However scanning to the right picked up the Red-necked Grebe again. Also 3 Little Gulls, an adult and 2 1st winters. Had texted MR about the Velvet Scoter but before he got to us it was flushed by a boat and we lost track of it. MR had been delayed by a Yellow-browed Warbler calling unseen near Wassand Hall.

Finished the day in HVWG Hide. Had the Gannet on tree island.

Didn’t look too fit but to quote John Cleese it hadn’t yet “fallen off it’s perch and joined the choir eternal”. Started checking the gulls roost and picked up 3 waders in flight. Pale grey with a strong white wing-bar and was thinking Sanderling or Dunlin when RL reminded me that several Grey Phalaropes had been reported by RBA today. The penny dropped and not long after they landed and there identity became obvious. Tried contacting MR but his phone wasn’t on. For the rest of the time we were in the hide they remained on the water mid-mere and with the fading light would have been very difficult to pick up if you weren’t sitting with us.

For more recent sighting in the Hornsea area check here.

Seems to be an influx of Jay at the moment with bird seen coming in on the coast and evidenced myself by Jays around Cottingham and Willerby this week. Seen at Hornsea Mere today but my been just resident birds.

8/7/14 After performing for at least a few birders on Arram Carrs on Monday the Common Crane was a no show for Geoff Dobbs early on Tuesday but was seen again early evening in the same area as yesterday.

9/7/14 The Common Crane remained on Arram Carrs until at least late morning on Wednesday.

Went to High Eske late afternoon with the intention of checking for the Common Crane from the other side of the river for friends heading for it in the evening. Had a good look at the nature reserve below heading north. Three Little Egrets were showing well.

Also a Little Ringed Plover on the east shore. Flushed a small wader. which didn’t fly like a plover and wasn’t surprised on ‘scoping it in the north-west corner that it was a Common Sandpiper. Also at least two Common Terns were still feeding on the reserve then flying north, possibly to Tophill Low NR. Three pairs of Great Crested Grebes were again attempting to nest on the same mounds they had been washed off last week.

Couldn’t see the Common Crane in the usual fields with the Mute Swans but there are at lot of hedges it could hide behind. Thought I had it the next field south but on closer view it was a Grey Heron! However on reaching Leven Canal had the Common Crane back on Leven Carrs. Very close to the path by Leven Canal so walked towards it keeping low. Got as close as I dared then took a few picture although the tall vegetation got in the way. 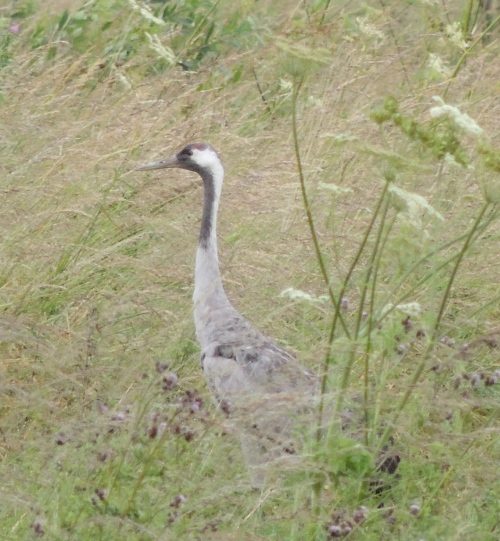 Retreated again keeping low to avoid flushing it [although some might have thanked me if it returned to the west of the river]. Met Richard Jennings and walked back south together. Had a tatty cream-crown Marsh Harrier over the river and a Kingfisher over the nature reserve.

6/7/14 Sunday afternoon with no further news on the Common Crane since Tuesday evening, when it was elusive due to disturbance from machinery working on Leven Carrs, I headed to High Eske. Had been threatening to rain all day and as I got onto Hull Bridge Road, Beverley recent heavy rain was apparent and beyond Swinemoor roundabout it started, getting progressively heavier, however it petered out shortly after reaching High Eske farm. At the nature reserve were a Little Egret and Common Tern again. On reaching Leven Canal started scanning the carrs. Not obvious so kept walking north to see if it was out of view along the northern edge where I’d last seen it. Also checked the newly excavated drain for waders. However a quick look to the west located the Common Crane on the opposite side of the river, near a flock of Greylag Geese, on Arram Carrs. Looked pretty settled so had a quick scan of Leven Carrs for raptors before heading back south. Had none but did have four Common Snipe in flight. Back at High Eske NR had several sighting of at least two Kingfishers. Also flushed several Snout moths.

7/7/14 Went to Tophill Low NR on Monday morning. Walked the full reserve but little of note, the best being Little Ringed Plover and Common Sandpiper, both on South Marsh West. A Wigeon summering on Watton NR. Did have my first Narrow-bordered Five-spot Burnet moths and as well a few Marbled White butterflies over North Scrub. 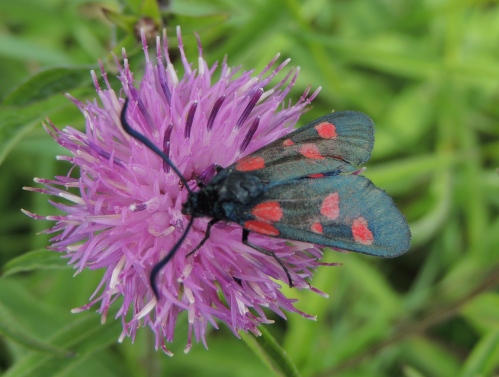 Also several shield-bug on the outside of D res car park hide. 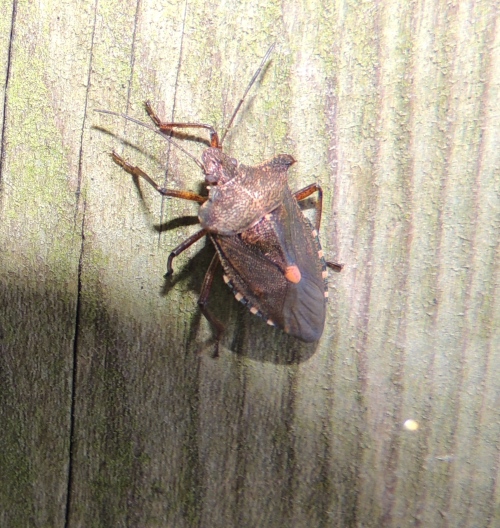 The Common Crane had already been seen in the general area I’d seen it last night so after consulting the OS map headed to Aike late afternoon. Had a Barn Owl hunting the verge just before the village. In Aike I took the footpath to the river bank where I joined Tim Cowley who was already watching the Common Crane along Mute Swans in a field west of Barmston Drain and further west than where it had been last night. Walked along the drain to get closer along what is marked as a footpath but hadn’t been walked recently. A tractor and trailer was working the far edge of the field and although not flushed it did cause to the Common Crane to walk north and closer to me. 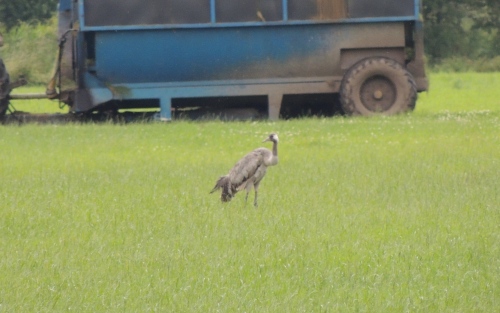 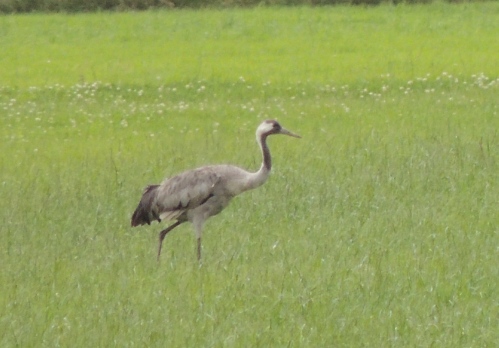 Walking back I had a look from the river bank again. Wasn’t initially on view but walking south saw it again having walked to the north corner of the field. 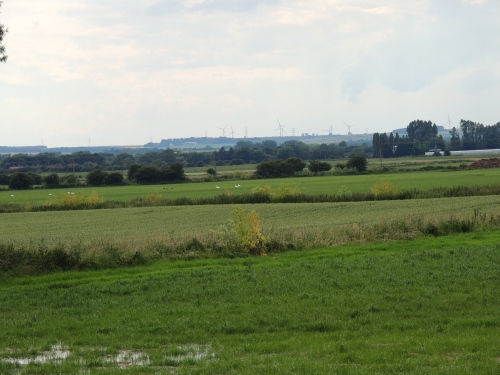 Had a look at Swinemoor this evening where I had three Little Ringed Plover as well as two Little Egret roosting in a tree in the south-east corner.