16/4/15 Haven’t done any volunteer conservation work at Tophill Low NR for quite a while. One of the main reasons recently is that my current work rota means I can’t make the main weekday volunteers day on Thursday. However I ‘m off work this week and with Richard scheduling work on Watton NR I agreed to join RL to work on what has been his baby for decades. No work has been done there for two years due to uncertainty over it’s status since the Environment Agency has been forced to attempt to sell off much of it’s holdings. Led to believe a sale is near although on terms that will guarantee it remains a wildlife sanctuary. Whether despite the imminent sale or as part of the terms of this sale, Richard had obtained permission to do the work necessary to maintain it’s nature reserve status.

RL and I took on the task of clearing brambles obstructing view from the public hide accessible from the footpath to the west of Watton NR. This hide gets little traffic, seemingly largely used by Tony McLean to take photographs in peace. 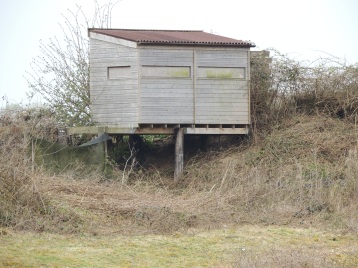 We also chopped down any willows that had grown since our last visit to prevent the reserve becoming willow scrub. Lukas finished off our task using a petrol “brush-basher.” having already cleared other areas of the reserve.

Other work undertaken included harrowing to recreate the bare areas favoured by ground nesting birds. In the past we have used herbicide to keep these area largely free of vegetation. Before the new harrow was risked on it’s first job volunteers walked the area and picked up any larger stones. These stones will be added to the gravel areas previously created for nesting Little Ringed Plover.

Pete Drury having a “harrowing” time.

The end result. May look like a ploughed field but great for ground nesting birds.

The tern rafts were also floated out for the first time in two years.

Inevitably a large amount of dead wood was generate which as seems the current practise was burned on site. Rl and I prefer to “incorporate” our pile into the remaining scrub. 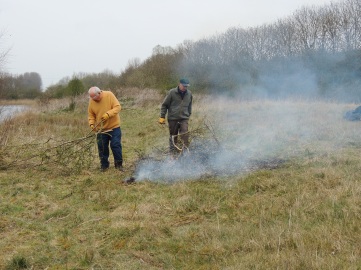 There is always plenty of fuel for Cliff Teal’s fire.

However today wasn’t just work as we heard our first Willow Warblers walking to the job along Watton Beck as well as several Chiffchaff and Blackcap. Later had the first Sedge Warbler singing at the back of Watton NR, close to where we were working.

The pair of Black-necked Grebes were still on D reservoir, present since Saturday.

Although it’s been a slow spring so far, common migrant are now appearing in good numbers. Also Little Gulls are starting to be seen in small numbers at Hornsea Mere including an adult today. On the warmer days butterflies including Peacock, Small Tortoiseshell, Comma and Brimstone are now on the wing.
Anyone who follows this blog will note this is my first posting for several weeks. This is down to several reasons including lack of time and energy due to work pressures. Also I just not been inspired by what has been a fairly quiet year so far with most of the interesting stuff covered by Tophill Low and Merebirders blogs anyway. Whether this posting is just a flash in the pan or a restart we’ll just have to wait and see.