26/11 The “toad of work” back in place but barely a tadpole today. Still only a couple of hours to spare and what with the cold thought I’d go just up the road to Raywell to check the Woodland Trust reserve of Nut Wood and Wauldby Scrogs. 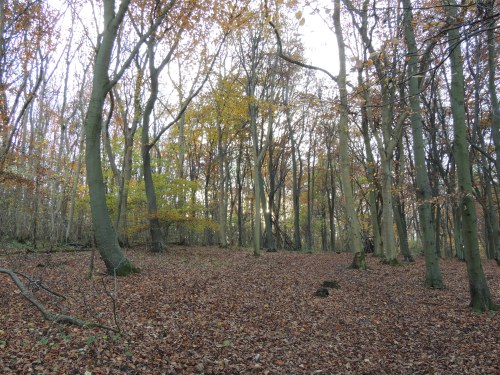 Started with a look for fungi but only some Candlesnuff.

As usual, and typical of woodland birding, it was initially hard work until I located the tit flock. As expected this was at the back of the wood which was still in sun. All the usual tits including at least 3 Marsh Tits and a Coal Tit as well as a photogenic Treecreeper and a few Goldcrest.

The 2 Snow Buntings were still just east of Paull river side car park this morning.

25/11 With John Brattan claiming to have photographed an apparent juvenile Gyr Falcon at Paull on Sunday afternoon RL and I were back there again on Monday morning. Started at Paull Holme Strays car park where we met Richard Willison. Had already looked for the falcon but had been beaten by the cold. I picked up 3 Snow Buntings over flying head then heading north west. RL and I braved the bleak conditions to have another look for the falcon and check the waders. With the state of the tide there were plenty of waders in the Strays with 1000’s of Golden Plover, 12 Grey Plover, 24 Ringed Plover and a Knot as well as variable numbers of Dunlin, Redshank and Bar-tailed Godwit. Went round to the riverside car park where Richard had already relocated the pair of Snow Buntings from yesterday. Still along the river side path between the car park and the Strays and again very tame.

Walking back they kept a few yards in front of us, occasionally flying onto the the pilings just off shore.

Went to Tophill Low NR this afternoon. Had been pretty quiet bird wise recently but while having my lunch in car park hide picked up a female Scaup. Went round to Middle hide to get pictures. 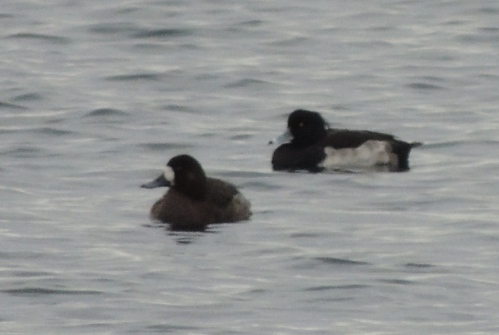 Continued as far as Hempholme Lock then did the gull roost late afternoon from top hide. Totals were:- Black-headed Gull 11000, Common Gull 20000, Great Black-backed Gull 1947 and Herring Gull 101. Also good numbers of corvids massing pre-roost with 9000 Jackdaw and 450 Rook. Several Tawny Owls calling in  D wood as we walked back.

The Great White Egret was still at Hornsea Mere this morning. A 2nd bird had been present again up to last Thursday.

The Yorkshire Belle in Paull boatyard.

Had a quick look at Salt End to check the tide then moved to the riverside car park where we met Pete Martin on his way out. Had just had a Snow Bunting along the path toward the Strays. Had beed found yesterday. The cracking male was still present practically at the feet of Paul Martin. Got a few shots before it was flushed by an inconsiderate walker. Although we heard it call twice couldn’t relocated it. 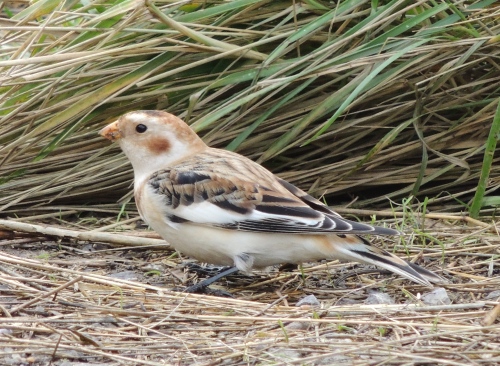 Roy and Paul were heading back to the car park when I re-found it a few yards further east. Was giving what sounded like a contact call and I wasn’t surprise to see a second drabber bird appear. Got some more pictures and this time they were more settled, only moving a short distance when flushed.

Next went to Swinemoor. No sign of last Sunday’s 1500 Wigeon but a good number of Lapwing as well as 5 Dunlin, Common Snipe, 3 Redshank, Golden Plover, 5 Teal and 6 Greylag Geese.

Ended the day at Hornsea Mere. The inevitable Great White Egret was on “tree Island” but a distant male Red-breasted Merganser was new. Unfortunately not at the same range as the drabber bird last month [see here]!

With the announcement this week of Hull as City of Culture 2017 I thought a quote from Philip Larkin was appropriate. Unfortunately Buffo buffo is currently firmly in place. Fortunately this weekend is my long weekend off work which also now come rounds quicker with the “new working arrangements” so I intend to have 3 good days of birding.

23/11 With the Black-throated Diver having departed North Cave Wetlands RL and I thought Welton Waters might be worth a look on Saturday afternoon. As has become normal “watersports pit” held only 2 Little Grebes, 2 Mute Swan, 2 Cormorant and a Tufted Duck but Brough Angling Complex was packed. With the drake back at Barton Pits this week hopefully it or it’s companion will be seen here again this winter. Looking over Brough Angling Complex we saw a cream-crown Marsh Harrier over the airfield putting up a mixed flock of plovers.

Walking towards the airfield had 12 Turnstone, 4 Bar-tailed Godwits, a Grey Plover and Redshank on the foreshore.

On the airfield were 120 Lapwing, 80 Golden Plover, 7 Curlew and a Common Snipe. The highlight though was a Stonechat showing well in the bushes by the airfield. My first there since 27/10/07.

They had been regular over wintering previously. Had a similar experience at other local sites, likely a result of recent hard winters, with no recent records at Hornsea North Cliff Boat Club and Haltemprice Farm, Willerby.

Had the returning or another cream-crown Marsh Harrier flying west over the Humber.

With both first winter Glaucous and Iceland Gulls seen during the week at Hornsea Mere headed there to catch the roost. On cue one Great White Egret appeared on ‘tree Island”. However this time instead of flying west to roost, probably in the ‘cormorant trees’, it flew east and was visible for a while in a tree by Kirkholme Point before dropping out of view. We saw 2 Great White Egrets on Sunday in Decoy Bay but only one was reported since. Also 6 Scaup were seen during the week.

4/11 With the end of my 3 week holiday coinciding with end of British birding time and the added complication of major changes at work I found it impossible to get out after work last week. Fortunately Monday was a lighter day at work and mid afternoon found me at High Eske NR. Walking towards the pit I was sure I’d seen 2 White-fronted Geese dropping onto Molescroft Carr with Greylag. However with most of the geese obscured by the flood-bank and the position of the sun not helping I was unable to confirm. Reaching the pit I quickly located 14 adult Whooper Swans. One had a red leg but I was unable to read it today. 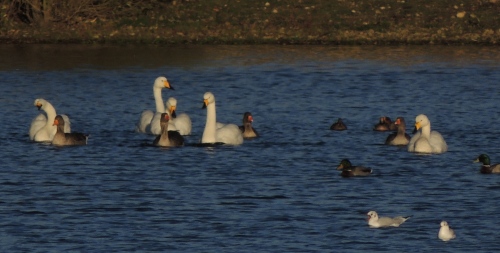 The geese flock flew in and I was able to confirm my sighting of 2 adult Eurasian Whitefronts as well as a juvenile Pinkfoot. Walked north to Leven Canal in the hope of Short-eared Owls or harriers but only had the regular pair of  Kestrels. Had a Grey Wagtail in the derelict lock on the way back south, Noticed a wake in the river. Too obvious for an Otter and no boats but then I saw the head of a large Common Seal swimming south, the first I’ve seen for a few years, since the end of  the invasion that had annoyed the anglers.

Getting back to the pit, as the light was fading I located a Green Sandpiper, at the far end of the island. Also 5 Little Egrets had come in to roost in the south west corner.

5/11 Only managed a walk on Willerby Carrs on Tuesday. Had Common Buzzard flying west. My 3rd in Cottingham in the same number of weeks.