28/3 Went to Welton Waters with Roy and Martin L on Thursday afternoon. The drake Smew was still on Brough Angling Complex although distant due to the number of anglers on site.

The northern extension now has a big screening banking. Why bother? Block the view of something and the obvious reaction is “wonder what’s behind this, I’ll climb up and have a look.” It’s a fishing pit so unlike a nature reserve there’s no problem with disturbance. Anyway actually a great place to view the area from. Very little on the “watersports pit” so move onto the river bank where Roy picked up a Short-eared Owl although it dropped into the reeds in front of the airfield. Also 7 Bar-tailed Godwits with c60 Curlew. 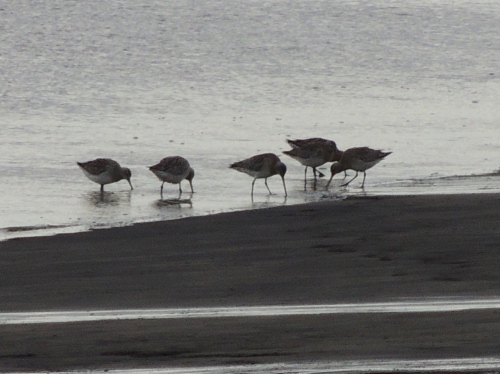 Too cold to bother checking the airfield further.

29/3 Had a walk round Cottingham KGV Rec on Friday morning. The Redwing were still in the area but more spread out. Possible Blackcap sub-song but couldn’t get on it. No sign  of the Fieldfare flock in the fields to the north I’d seen earlier in the week.

Did Hornsea Mere with Martin L, Roy and John this afternoon. Roy had a Red Kite but lost to view before anyone else got on it. Went to Barmston and walked to the reedbed but had no pipits and only 2 Common Snipe.The gulls were too distant. For what we missed at the latter site check here.

Back home had a fly over by the remaining Orange-winged Amazon. 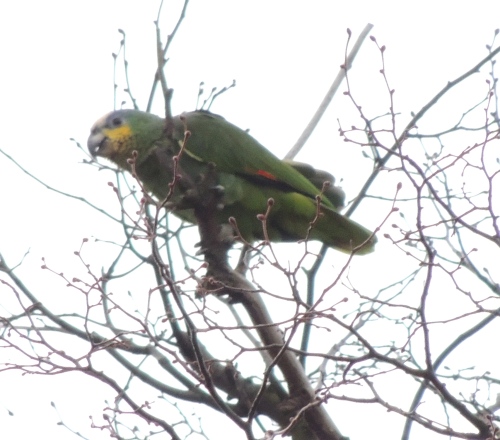 Walking Priory Road this evening, like the park this morning, still 100+ Redwing but no Fieldfare.

Check here and here for news from  Tophill Low NR.

Been a non starter moth wise so far but Roy had a White-shouldered House Moth in his kitchen on Tuesday.

Kumlien’s Gull still at Barmston this afternoon. Also 2+ Adult Little Gulls and 3 Jack Snipes in the reedbed north of the car park.

26/3 Headed for Barmston with Martin L and Roy on Tuesday morning following the report of a Black Redstart around the caravans. Had a walk then a drive around but only came up with 2 Robins, 9 Blackbirds and a Song Thrush. Weather still arctic so wimped out on the other birds in the area and went to Tophill Low NR. The 3 Goosander were still on D reservoir.

Walked south for little gain except for 23 Curlews commuting between Watton NR and Carrs. When will we hear warblers or see Little Ringed Plover and Sand Martin? Had another look at D reservoir from middle hide and had closer views of 2 of the Goosander.

Ended the day confirming that the Ring-necked Duck was still on the fishing pond at New Arram. Still with c100 Tufted Duck and added Pochard and Greylag Goose to my site list.

Richard Jennings tells me that there have been 23 Pink-footed Geese in recent days in fields on the other side of the river from High Eske NR.

For recent new from the Kelk area check here.

18/3 Went to Tophill Low NR with Roy and Martin L on Monday morning. Had the 3 Goosander still on D reservoir. Walked north. Failed to get either brown tit species on the D wood feeders but had 5 mobile Little Egrets in the Hempholme Meadows area.

Walked the south end this afternoon. Nothing of note but had a female Great Crested Newt crossing the road by South Lagoon on the way back.

Finally went to check out the “new birding site” at New Arram where the Ring-necked Duck had taken up residence. Followed the directions, turning left immediately after the level crossing and driving to the end. Word of caution, there is limited parking and serious risk of getting struck on the muddy verge and Roy had a run in with a residence for parking “on her land”. After parking we crossed the drain then walked toward the obvious trees, through which the pond could be glimpsed. The RND was quickly picked out among c120 tufties. 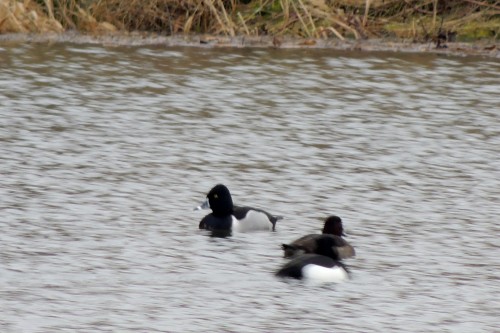 It’s amazing that a pond that can hold such a good number of ducks has previously been a secret. Suspect we’ll be back sometime. Interestingly another “secret pond” that held an Osprey 2 years back is only a few hundred metres away.

For recent sightings in the Hornsea area click here.

19/3 The Great Northern Diver was still at Hornsea Mere on Tuesday and Kumlien’s Gull still at Barmston.

21/3 Roy and Martin did the high tide at Paull on Thursday . At Paull Holme Sands they had a Peregrine, 500 Curlew, 2000 Golden Plover, 8 Shelduck, 5 Turnstone and a Ringed Plover.

The Great Northern Diver was still at Hornsea Mere.

For today at Barmston check here.

22/3 Kumlien’s Gull still at Barmston on Friday afternoon off the car park .The Great Northern Diver was still at Hornsea Mere.

12/3 Roy and Martin L had the Tundra Bean Goose again at The Lakes at Far Grange. Also the 3 Pink-footed Geese and 2 Barnacle Geese.

14/3 Roy and Martin L had the Kumlien’s Gull still on Barmston beach Thursday morning. Also a White-billed Diver flew south, picked up by Martin and confirmed by Roy. For more from Barmston see here.

At The Lakes at Far Grange the Pink-footed Geese and Barnacle Geese were still present but no sign of the Bean.

16/3 Went to Hornsea Mere with Roy on Saturday afternoon. Saw the Great Northern Diver which had turned up again after disappearing from Far Ings where it had been seen for a few days. Looking at dates looks likely the same bird has been seen at Broomfleet Ponds, Tophill Low NR, Hornsea Mere and Far Ings. May even be the bird seen early winter near Scunthorpe. 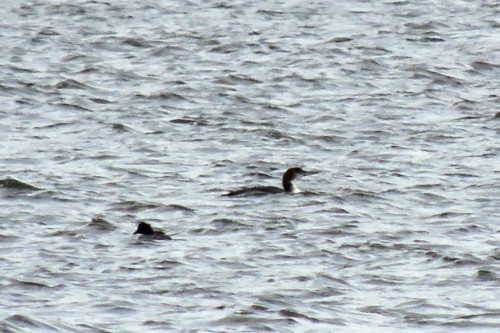 Went to The Lakes at Far Grange where only the one Barnacle Goose was present, but had good views of a Barn Owl as well as an amazing flock of 200 Greenfinch. 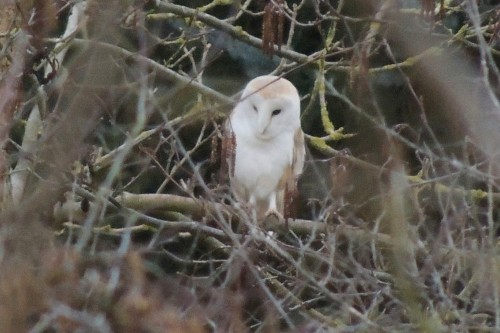 65 Waxwings at The Vales in Kirk Ella this late afternoon.

17/3 Went to Swinemoor with John on Sunday morning. Very wet again. A pair of Pintail was the highlight, also several Teal and Lapwing but missed a Little Ringed Plover seen by Nathan Pickering.

Went to Hornsea Mere and had the Great Northern Diver again.

Went to Barmston. No initial sign of the Kumliem’s Gull. Good number of waders, the best was a Purple Sandpiper but also several of Sanderling, a few Turnstone, and a Bar-tailed Godwit associating with a the Oystercatchers. Offshore were a few Red-throated Divers and Great Crested Grebes. As we were about to leave the Kumlien’s Gull flew in from the the south, now so pale as to be indistinguishable from an Iceland Gull.

Steve Mulligan had 65 Waxwings in his garden on Woodland Drive in Anlaby and David Littleproud had 12 by Woodmansey church.

The Ring-necked Duck spent most of the week at Normandy Barracks in Leconfield but having gone missing on Friday was refound back on a fishing pond in New Arram on Saturday and was still there today.

“Colder than a well digger’s ass”

Having spent 5 days in Northern Spain where although not hot was better than at home it was no surprise to get home and find winter was returning again. Intend blogging the trip soon but as I currently can’t upload my pictures will have to put this on hold for now. For the same reason I’ll have to depend on friend’s pictures for local stuff for now. Don’t seem to have missed much with the only news I’m currently aware of is that the Ring-necked Duck seems to have taken up residence at Normandy Barracks although has also been seen on a pond at New Arram and the “Kumlien’s” Gull is still on Barmston beach.

5/5 Tuesday, my first day back at work, started foggy but had cleared by early afternoon and as this might be the last mild day for a while thought I better head for High Eske in case the Ring-necked Duck dropped in. Walked round the borrow pit and counted c1000 Wigeon spread between High Eske NR and Pulfin NR. Also a drake Pintail on both sites. Heading north along the river there was no obvious sign of any swans but had 9 Little Egrets. Had a look over Leven Carrs for raptors and had 5 Pintail on the scrape. Unfortunately the fog rolled in again putting an early end to the day.

6/3 Had a sub-adult Gannet over Southwood Road, Cottingham on Wednesday morning. Robert Jaques also had one [or the same?] over Hull University.

7/3 Had my first moth of the year Thursday morning when I found a Hebrew Character on a door on Southwood Road, Cottingham. Unfortunately the day got colder and didn’t bother putting the trap out.

8/3 Went to Welton Waters with Roy and Martin L midday on Friday. Had a drake Smew again on Brough Angling Complex and a distant Otter on “watersports pit”.

Went to Tophill Low NR later but because of the weather only did D reservoir. Had 3 drake and a redhead Goosander. The redhead Smew had be seen recently on Watton NR. More recent news here and here.

10/3 Went to Hornsea Mere with Roy on Sunday morning. Started in the hide where Roy found a probable 2nd winter Caspian Gull on Swan Island [also seen independently by Mark Robinson] Went round to Kirkholme point. Had a Water Rail again with Moorhen in the wet field by the entrance but couldn’t find the Bittern. However found 2 ringed Black-headed Gulls.

Went to look for geese in the Skipsea area. None at Skirlington but the usual flock of feral birds was at The Lakes at Far Grange. Also 4 “pinkfeet” including 2 larger looking birds. Kept them under observation and eventually they hauled out on the far bank.  One had bright orange legs and it’s identification as a Tundra Bean Goose was confirmed when it flew low with a Pink-footed Goose showing a darker upperwing.

Also did Bewholme Hall, Leven bypass and Heron Lakes before for ending up at Tophill Low NR. Again only had a look over D reservoir. 8 Goosander, 4 drakes and 4 redhead, and a male Scaup had been seen earlier. More on here.